Education and in particular equal rights for women are of great concern to us at Jambo Bukoba. For this reason, we have dedicated the month of May to the role of women and would like to introduce you to strong women and role models from Tanzania.

Women who have prevailed in areas that are usually reserved for men.

Women who have dedicated their lives to outcasts and have even sacrificed their love for them.

Women who fight for the rights of girls and women.

Strong women who have initiated change in Tanzania.

Women who are worth knowing – their name and story.

“Nowhere in the world is a woman safe from violence. The strengthening of global commitment to counteract this plague is a movement whose time has come.”

She is someone who has made a name for herself in politics: Asha-Rose Mtengeti Migiro is a lawyer and politician. After studying law in Dar es Salaam, she earned her doctorate at the University of Constance. Back in Tanzania, she became politically active and, from 2,000, was minister in charge of urban development and equal rights for families and children. In January 2006, she becomes the country’s first female foreign minister.

Just one year later, Asha-Rose becomes the UN‘s highest-ranking woman as Deputy Secretary-General of the United Nations – to Ban Ki Moon. Her main area of responsibility is development policy. Until 2019, the now almost 65-year-old is the United Nations Special Representative for HIV/AIDS in Africa.

In all of her offices, but also in advocacy associations and women’s organizations, she is continuously committed to improving children’s and women’s rights.

“My grandmother supported me and she used to say if I continue with it (ed. being a referee), I will  be able to change the negative perception about it. And this will help other women to get chance to practice it too.”

Jonesia is passionate about playing football, but in her neighborhood women’s soccer is extremely unpopular. Seeing no opportunity to play herself, she decided to become a referee in 2006. Not an easy decision, after all, women are a rarity in this male-dominated sport.

In her family, her grandmother is the only one who supports her in her decision and advises her to always stand up for what she believes in and fight for it. So Jonesia continues despite the resistance in her environment.

In 2006, Jonesia began officiating lower division games. Five years later, she was promoted to the First Divisions League and just one season later to the Premier League.

However, she is gaining notoriety in Tanzania for having presided four times over the East African country’s biggest, best-known and arguably most talked-about derby – that between eternal rivals Young Africans and Simba, the country’s two most successful clubs. The two clubs have the most fans. It is estimated that every citizen supports one of the two clubs. At first, many didn’t believe a woman could officiate such a heated match, but she silenced her critics and mastered the task with excellence.

In 2019, the Confederation of African Football decided to use three female referees at a top men’s tournament on the continent for the first time in history. Jonesia is among the 29 match officials for the 2019 Africa U-17 Cup of Nations.

In addition to her passion, the 31-year-old is a teacher and also an entrepreneur. In between, she trains to stay fit for local and international matches.

„The secret of change is to focus all of your energy, not on fighting the old, but on building the new.”

She is one of the most beautiful women in the world: in 2005 she was Miss Tanzania and Miss World Africa. Today, Nancy Abraham Sumari is an author, businesswoman and social entrepreneur.

The 34-year-old grew up together with five siblings on a farm in Mererani. Since her family has given her many opportunities and possibilities to go her own way, she wants to give something back to society.

By founding the Neghesti Sumari Foundation and the Jenga Hub, she gives children from poorer backgrounds the chance of a digital education. In courses, for example, they learn how to program software. The goal: to empower the children with skills and knowledge to prepare them for the ever-changing technological world; to make the country fit for the future in the long term and prepare the next generation for the fourth industrial revolution.

With her two children’s books published so far, “Nyota Yako” and “HAKI,” she aims to inspire girls in particular to pursue their dreams and encourage children to know their rights, which protect them.

“A girl with a dream is fire.“

At the age of 13, Rebeca Gyumi already knew her path. She studied law to strengthen the rights of women in Tanzania.

Up until 2016, girls in Tanzania could be married off as young as 14. Rebeca challenged the Marriage Act of 1971 in court – with success! Since then, marriage has only been legally permitted from the age of 18.

Since reality often looks quite different, Rebeca continues to campaign for the rights of girls and women with her organization Mschiana Initiative. On the one hand, Rebeca wants to give them the necessary self-confidence and inspire them to speak up for their needs themselves and to demand them.

On the other hand, sexual self-determination is a major concern for her and in this context she has developed a workshop with Jambo Bukoba in which girls are educated about their periods.

We are all the more proud that Rebeca is a board member of our partner organization Jambo for Development!

Embed from Getty Images
Susan Mashibe on the left, attending an event in New York

„As a successful female entrepreneur, I recognize that I have a responsibility to support those following in my footsteps, and to give back to the community.“

When her parents went on a journey and left her with her grandmother at the age of four, Susan Mashibe knew that she wanted to become a pilot. Then she could simply fly after her parents. At the age of 19, her dream of flying in the USA actually comes true.

When she returned to her native Tanzania, she was the only woman in Tanzania who was both a certified pilot and an aircraft engineer. With the help of a loan, she founded her own company, VIA Aviation, which exploits a gap in African aviation – that of private jets.

Her first client – Jacob Zuma, later President of South Africa, was so satisfied with the quality of her service that she soon managed all private aircraft associated with the South African Embassy.

Thanks to a hangar – a unique feature in the African country – Susan Mahibe’s company is the first in Tanzania and all of East Africa to offer logistical support – including aircraft handling, clearances, security and fuel.

For almost 18 years, she has manoeuvred her clients’ private jets through the jungle of different national regulations and bureaucracies. In addition to private flights by famous people like Ophrah Winfrey, she coordinates the flights of the UN Ebola campaign, corporate executives, monarchs, diplomats, the military, but also the flights of heads of state, such as the Air Force One flights of American Presidents Bush and Obama.

In addition to her professional duties, she advocates for the inclusion of math and science subjects in education programs – with a special focus on girls in Tanzania’s primary and secondary schools. 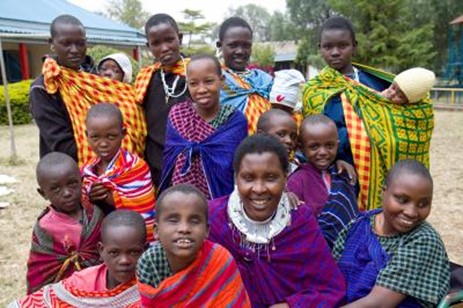 “There is nothing more precious and pure than being loved and cherished by children.”

In Tanzania, the idea is still widespread – especially in rural areas – that a child with a disability is seen as a punishment from God. These children are often hidden from the other villagers and not infrequently mistreated.

Anna Mollel tracks down these children, helps them and informs their families. Thanks to her commitment, 12,500 children have received medical treatment and hundreds have been reintegrated into their village communities and go to normal schools.

In 2012, she received the “World’s Children Prize for the rights of the Child“, which is considered an alternative Nobel Prize for people who are particularly committed to children’s rights and is awarded by the children themselves. She used the prize money of $100,000 to build an inclusive school.

She herself is a Maasai. In this culture, you are considered rich if you have many children. Her father has nine wives and 45 children. Her mother is the fourth wife. Against her father’s resistance, she pushed through with her schooling and vocational training. To this day, she is an exception. Actually, her father wanted to marry her off to a much older man when she was twelve years old. It is only thanks to her mother that she is able to realize her dream – to train as a nurse.

Later, faced with the choice between her children and her own marriage, Anna decided to continue her life’s work and left her husband. For her, education is the key to change – just as it is for us.

A strong country needs such strong women! We at Jambo Bukoba want to do just that: to strengthen girls and women in their self-confidence and self-acceptance and to give them the chance of a self-determined life through education!

That’s why we’d love for you to support our current projects or volunteer your time!