In this article, we turn our attention to popular food in Tanzania. If you have never visited the country, what can you expect to eat in Dar es Salaam, Bukoba or elsewhere?

Munich-based Gertrud Maugg-Mulokozi calls Tanzania her second home. She has visited this wonderful African country many times over the years and has friends and family there. Gertrud was happy to talk to us about Tanzania’s food culture. Here, she provides an excellent insight into Tanzania’s top taste sensations.

What typical Tanzanian dishes should you definitely try when spending time there?

Ugali is very popular in Tanzania and other parts of Africa too. It’s basically corn meal or maize flour mixed with boiling water or milk. The flour is stirred vigorously into the liquid until it forms a thick, lump-free mass. The more flour you add to the mixture, the harder the ugali mass gets.

Once it is cooked, this large ugali mountain is placed onto a plate. Then, each guest tears off a piece with their fingers and forms it into a ball. And into this ball of ugali, they form a pit. Then they scoop up some sauce or another side dish.  A chicken sauce called Kuku Na Pili Pili Hoho, or nyama (meat) sauce is popular.

Ugali is rich in carbohydrates. In fact, many athletes make ugali as a healthy and energy-laden alternative to rice or potatoes.

What about that spicy Tanzanian spinach mchicha? How is that made?

Mchicha is Swahili for spinach but actually, it’s the amaranth plant that is mostly used. There are a few variations of mchicha. The easy version is to chop it up and fry it lightly with garlic, onions and tomatoes.

Or you can make it richer, with ground nuts, curry powder, garlic, red onion, ginger and some chopped tomatoes. Whip it all up together with a little coconut milk and it is delicious. You can add chilli too to make it even spicier.

My mouth is watering already. Tell me about Tanzania’s famous cooked bananas. Cooking bananas sounds very strange and exotic to my ears.

The bananas used in cooking in Tanzania are known as plantains. They are huge – as big as your forearm. You take fairly green, unripe plantain bananas, peel off the thick skin, chop them up and cook them in water, as you would potatoes.

The bananas are eaten with beans or with mchicha
and often with meat. The meat and banana dish is like a stew. It is known as ndizi na nyama. It is quite spicy and features curry powder, turmeric and pepper.

Is Tanzanian cuisine influenced by other countries? What was your impression when you were there?

As major trading outposts, Dar es Salaam and Zanzibar have stood at the crossroads of multiculturalism for centuries. So over time, Tanzania has absorbed dishes and spices and food influences from many different places, like India, the Middle East and European countries like Portugal, Britain and Germany.

Indian influence is particularly present in the use of spices such as curry and cumin, but also in dishes such as Tanzanian beef samosas or biryani. I musn’t forget to mention chapatis too – which I love – these are very popular in Tanzania.

From the Middle East we get a dish that’s a bit like kebabs. The Tanzanian version is called Mishkaki. The meat is marinated and spiced with turmeric, ginger, garlic and chilli and chargrilled till it’s almost black but still succulent. Mishkaki is full of flavour.

I read that antelope and gnu meat is popular in Tanzania. Have you tasted that yourself?

No – never. But I do recall that in Tanzanian hotels in the 60s and 70s, ex-pats were able to eat giraffe meat. I don’t know if that still happens today.

Are there vegetarian options in Tanzania?

Meat is definitely dominant but there are plenty of vegetarian choices in Tanzania, such as vegetable side dishes like the mchicha I mentioned, or ugali, pilaf and biryani. There is an aubergine curry called mchuzi wa biringanya that is delicious whether you are a meat eater or vegetarian.

The supermarkets and markets in Tanzania have a ready supply of fresh fruit and vegetables and other foodstuffs suitable for vegetarians.

What do Tanzanian families like to eat at Easter or Christmas?

Barbequed meat or nyama choma is a classic on special days if a family can afford it. Goat is the preferred option here. The meat can be prepared in advance with a marinade of garlic, ginger and lemon juice. Then it is put on a wire mesh and roasted over a charcoal grill. A salad of coriander, onions and tomatoes is a fresh and tasty side dish with nyama choma.

Situated in the Indian Ocean and with many major internal waterways like Lake Victoria, is fish also quite popular in Tanzania?

Yes, fish is popular and the ocean and lakes are great sources. But large quantities of good fish are generally harvested and exported. Years ago on the Indian Ocean, you could buy fresh fish directly off the boat and it was popular then to eat small, raw sprats – about 10 cm long.

There is a popular Swahili fish curry recipe made with coconut milk, tamarind and other spices called mchuzi wa samaki. It’s easy and can be quickly rustled up with white filets or salmon.

Pombe or mbege is another popular drink. That’s home-brewed banana beer. It’s also very sweet and can be quite heady and a bit dangerous – if you drink too much of it. The beer is poured into gourds and drunk using a straw.

Where would we find Tanzanian products in Munich?

There are African or Indian stores in most parts of Munich, and you will find all the typical ingredients there. And nowadays, many of the ingredients for a Tanzanian feast can be purchased in standard supermarkets. Papaya and mangoes, when in season, are found easily, and sweet potatoes are available all year round.

You’ve probably also seen a large brown root vegetable outside Indian shops and wondered what it is. That’s cassava or muhogo as it is known in Tanzania. It’s a staple food in many tropical countries. You can eat the roots and leaves of the cassava bush. You cut up the roots quite thinly and fry them in oil, like you would with french fries. Then you can cover them in a spicy sauce made with curry, paprika and ketchup. The cassava leaves can be cooked like spinach or made into a soup.

Is there a Tanzanian restaurant in Munich?

Yes, there is. In Taufkirchen, a suburb of Munich, there is a Tanzanian restaurant called Kiliminjaro Café and Restaurant where you can eat typical Tanzanian dishes, or get them as a takeaway. You can purchase spices directly from Tanzania there. The owner Martha Lyayuka-Fluhrer comes from Tanzania and has published a cook book with her favourite Tanzanian recipes.

Can you leave us with your favourite Tanzanian recipe before we finish?

Martha has kindly provided a recipe from her book. It’s for a tasty and easy salad that I love to prepare.

Thank you, dear Gertrud, for this delicious insight into the tastiest dishes from Tanzania.

from the book “Rezepte aus Tanzania” by Martha Lyayuka-Fluhrer 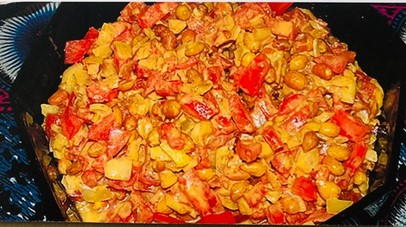 Tip: This salad can also be served as a side dish with meat. It also goes very nicely with a glass of prosecco.

Jambo Bukoba is an aid organization based in Munich that supports children in Tanzania. It does this through sport and education. Learn more about the project work and how Jambo Bukoba is helping thousands of young people in Tanzania to have better futures. Thank you for your support.