Music can make a change!

MUSIC CAN MAKE A CHANGE!

BEATS FOR BUKOBA. A great gesture by great artists for a great cause. 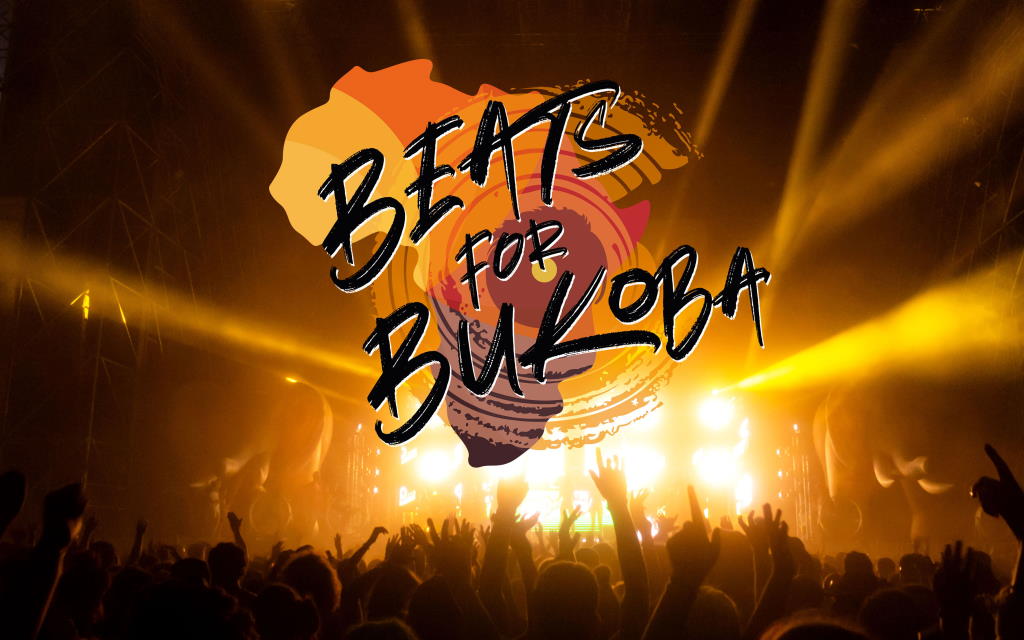 That was the idea behind our first virtual charity concert BEATS FOR BUKOBA, which went out live to the world on YouTube on 21st March 2021 at 8:00 pm. At this event, professionals, amateurs, stars and beginners came together to support girls and boys in Tanzania with their music.

The idea behind the fundraising concert

These are crazy times we live in. The pandemic is a game changer. No gigs, no concerts, no festivals. Those were the thoughts of the team behind BEATS FOR BUKOBA.

And crazy times call for crazy ideas. And the crazy idea of contacting artists from all over the world and asking them to record one or more songs and to make them available for free for a streamed concert: that was the big idea of the BEATS FOR BUKOBA creative team. 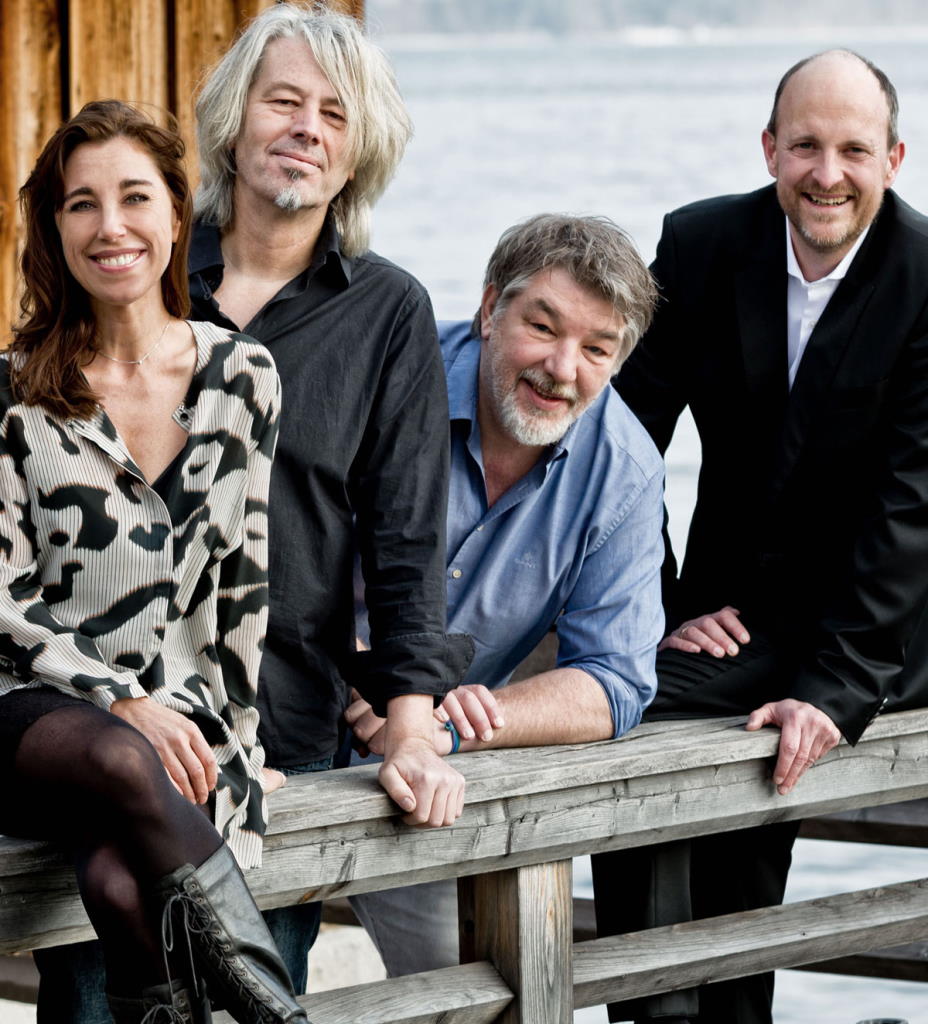 Behind the team is a group of artists, musicians and creatives who worked together at an advertising agency in Munich more than 20 years ago: Sabine Gistl, Sebastian Schwarzer, Frederik Kittsteiner and Reinhard Rohm.

Jambo-Bukoba founder Clemens Mulokozi also worked at the same agency at that time. Contact with these former colleagues and now friends remained over the years. In fact, Sabine Gistl had been involved with Jambo Bukoba from time to time in the past. On the last occasion, she plunged into the ice-cold Riemer See with Clemens for a x-mas fundraising challenge.

Shortly afterwards, on December 27th 2020, to be precise, the two friends Sabine Gistl and Reinhard Rohm sat together, reminisced about old times and strummed a bit on the guitar to break up the dreary lockdown routine. They danced around, drank some wine and suddenly, they had a brainwave. Out came the germ of the idea for this project.

They wanted to do something that would be really “stressful“. That’s why they immediately set the date for their first virtual streaming concert for the end of March. That left them with just three months to prepare.

But such an idea would remain just an idea if it didn’t have good supporters in the form of great friends, artists and performers who were immediately willing to support this initiative…

The BEATS FOR BUKOBA artists 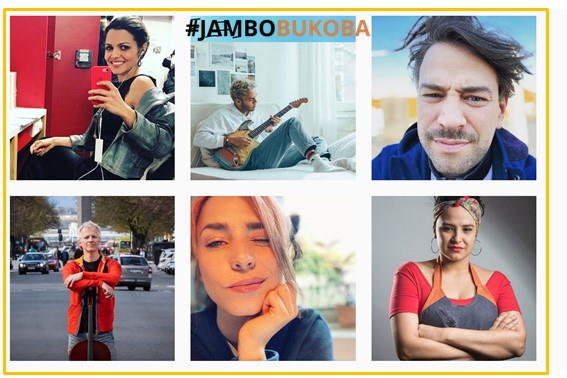 It was decided, the streaming concert should be free for any music fan and viewers should be able to donate something towards the work of Jambo Bukoba. But to do awaken interest, artists were needed who would spontaneously and unselfishly participate.

And these artists – they came. They gathered in a very personal way. The BEATS FOR BUKOBA team tapped into their networks and a colourful ensemble of entertainers from a wide variety of musical genres emerged.

Sabine Gistl, for example, is friends with soprano Anna Karmasin, who has also sung at Carnegie Hall and the Munich Philharmonic. Sabine also knows the singing chef Gloria del Fogon who she met while playing polo in Buenos Aires.

Clemens pulled in the jazz band Quadro Nuevo through a contact at DHL, and the US R’n’B star Dreion, who is currently a contestant on the 19th season of American Idol.

In addition, there was the Norwegian cellist Øyvind Gimse, who has been nominated seven times for a GRAMMY, the Grimme Award winner Anke Greifeneder, local Munich and Bavarian artists, and even the St. Don Bosco Choir from Bukoba  in Tanzania led by our very own Jambo for Development project leader Gonzaga.

And Sabine was relentless in her pursuit of star power. Her motto was: “the worst they can say is no.” She got onto the likes of Sting, Ed Sheeran and Max Raabe, but they were unavailable due to other commitments.

In the end, there was a line-up of 20 artists from all over the world – from Germany, the Netherlands and Norway, but also from Argentina, the USA and of course Tanzania.

The performers had all recorded one or more videos of their songs in advance and given it their all: they sang on house roofs and from their living rooms and had even created special performances.

And keeping the stress element alive, the last music clips were still being delivered the night before the concert. Phew!

There wasn’t just singing support either. Many other celebrities from Peter Wittkamp, to Don Johnson, Vera Int-Veen to Michael Lott, or Regula Grauwiller and Stefan Gubser or even RZA  from the Wu-Tang Clan pitched in, recorded a short support video and publicised BEATS FOR BUKOBA.

The concert and its highlights 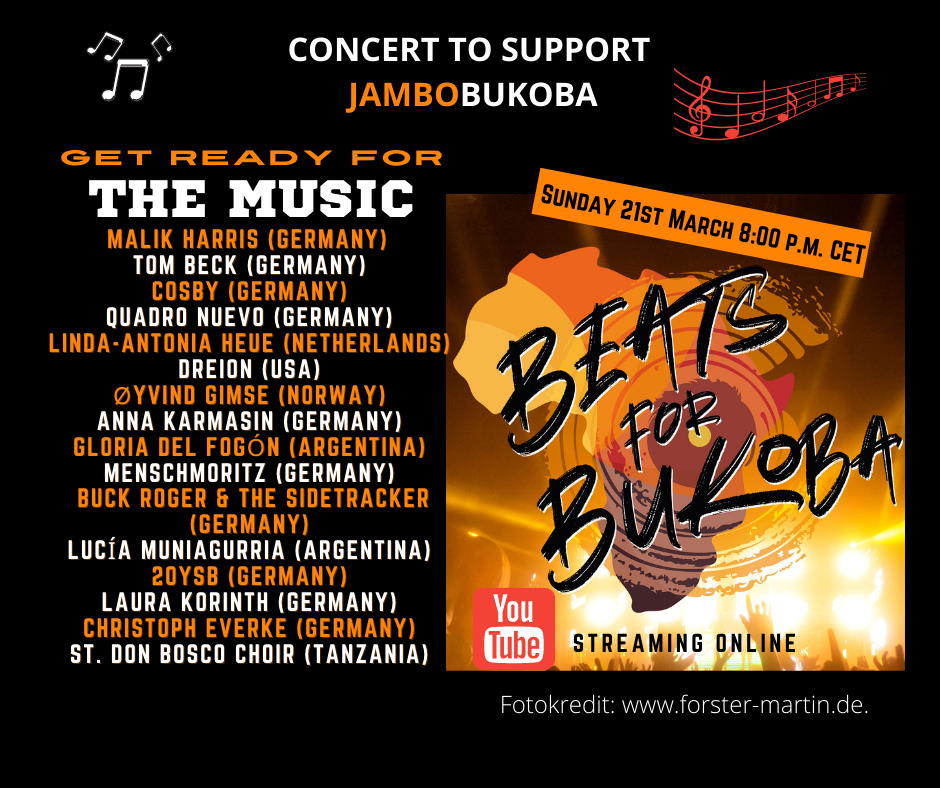 Our Jambo Bukoba frontman Clemens Mulokzi hosted the livestream together with TV presenter Nina Eichinger from the sofa of a living room in Schwabing, Munich. As chance would have it, the popular presenter, who is otherwise better known from award ceremonies such as the Echo Klassik or the Bavarian Film Award, lives in the same house as Sabine Gistl.

So that everyone could be at close quarters together during these pandemic times, participants in front of and behind the camera were tested for COVID in advance and were happy to get a negative result.

The concert started and the viewer numbers went up rapidly. After less than four minutes, more than 200 people were already watching.

It was a similar story with the donations. During their moderation, Nina and Clemens were bemused by the many “pings” sounding in the background – a signal of the arrival of a new donation. The audience came in fast and thick and after the first 15 minutes, donations were topping the 1,000 Euro mark.

The colourfully edited streaming concert presented a broad musical spectrum. We had pop. We had rock. We had opera. We had reggae. We had jazz. And of course, classical music. A big repertoire from amateurs with heart and soul to professionals with star potential.

But really – a live charity concert on YouTube with no live music at all? No – that’s not possible! That’s why the team came up with a surprise and suddenly Buck Rogers & The Sidetrackers were performing live in the same living room.

This apparently also surprised the camera, which suddenly went black after this live performance. Thanks to the fantastic technical support of Lukas and Tushin, the stream was eventually revived. These two students gave it their all and, despite their upcoming school finals, preferred to spend their nights with the BEATS FOR BUKOBA team rather than study math.

But there was certainly some improvisation required for a short time. The artists performances went on without further moderation by Nina and Clemens. Technical director, Frederik Kittsteiner raced to his agency and grabbed a replacement camera which he had already set up there for an important presentation on Monday. Simultaneously, Lukas and Tushin managed to get the existing camera working again and less than twenty minutes later, the stream was back running flawlessly.

A small, big highlight was one of the last “Bings” towards the end of the event when an artist not only performed for free and passionately, he also spontaneously donated €1,000. Many thanks Malik Harris!

The project that Jambo Bukoba wanted to support with the donations was quickly decided.

The Ntungamo Primary School in Biharamulo District Council, Kagera won both the District Bonanza and the Regional Bonanza in January of this year.

The school, parents and students but also the community unanimously decided to use the prize money to build two classrooms.

The situation there is extremely tough for the 1,264 students. There are only eight classrooms for the 568 girls and 696 boys. On average, 158 children are crowded into one room.

With the construction of two more classrooms, the ratio would be reduced to 126 students per classroom. While still an unimaginable number for us in Germany, this would significantly ease the current situation at the school and create a more pleasant environment for learning and teaching.

Additional donations of € 28,700 were required to realize the project.

People in the community will also donate additional local building materials. Together, this means that the local people will contribute €6,700 to the project. And this in a region where every second person suffers from extreme poverty.

The results: the funds raised by BEATS FOR BUKOBA

he donation goal of BEATS FOR BUKOBA – clearly broken down

The concert viewers were able to donate via a special donation link, but also directly, securely and easily via the Jambo Bukoba website. The virtual donation barometer showed the proud sum of € 10,000 at the end of the concert.

The next few days were spent calculating, adding up and getting an overview of the donations that had been received through the various channels. In the end we were able to announce an incredible € 27.522,04 raised.

One week after the concert, you exceeded our donation goal: € 29.502,04 were collected under the donation reference “BEATS FOR BUKOBA“. An incredible result!

With your help and support we can realize the construction of the two classrooms as planned between April and June this year.

For all who missed BEATS FOR BUKOBA

If you missed our Couch-Charity-Concert and are longing for some live atmosphere during these meagre Lockdown times, put your legs up, make yourself comfortable on the sofa anytime and enjoy the three-hour concert on YouTube.

Once again, we would like to thank all the artists without whose support and dedication such a concert would never have been possible.

To the organizing team who invested so much passion, heart and soul and most of all time into this project and brought it to such a great conclusion.

To all of you out there who have donated so diligently and generously. You have made it possible for us to build the two classrooms this year!

We will keep you informed of what is happening with this project on our social media channels.